Elysian Auto Service is celebrating
their 5th year with
Brakes for Breasts Cancer!
2019

Auto shop's fundraising tradition rolls on
·         By Brian Arola barola@mankatofreepress.com
1
ELYSIAN — With clinical trials for a breast cancer vaccination nearing reality, an Elysian auto shop is continuing its fundraising tradition to support the research.
It’ll be Elysian Auto Service’s fifth year participating in Brakes for Breast Cancer, where more than 100 auto repair businesses across the country donate money to the Cleveland Clinic’s ongoing research each October. The shops collectively raised nearly $747,772 over the last eight years.
Susan Morsching, who co-owns the Elysian business with husband Carl, said the cause is personal to their family. Her mother died from ovarian cancer, while he had two aunts with breast cancer.
The same researchers are also looking into developing a vaccination for ovarian cancer. A family history of breast cancer is associated with increased risk of ovarian cancer.
“I just feel like it’s a really good cause,” Morsching said. “(We were) the only one in the state of Minnesota the last four years, but I’m glad to see another shop do it this year.”
An auto shop in Red Wing joined this year.
Two auto shop owners from Brook Park and Medina in Ohio, Laura Frank and Leigh Ann Best, first came up with the fundraiser in recognition of how many lives are touched by the disease.
Frank said ensuring all the money was going directly to the Cleveland Clinic’s research was the top priority. Dr. Vincent Tuohy, who heads up the research, sends the organizers updates on his progress. He and his team also meet with the organizers each year when they bring their donations.
“When something exciting happens, he’ll send us information,” Frank said.
Tuohy said in an email he anticipates recruiting patients into a clinical trial in early 2020. The researchers are working on an application to the Food and Drug Administration ahead of a meeting with officials later this year.
None of this would have been possible without philanthropic donations,” he wrote. “The support I have received has literally kept this program going during periods when government support was not available.”
The research team’s ultimate goal for the vaccine is to prevent breast cancer from developing in the first place. Their data already found evidence suggesting vaccinating against certain proteins can provide immune protection.
Morsching said a future where people can take preventive measures against cancers is an exciting idea.
“If there could be some type of cure to help one person defeat cancer, it would be great — or prevent it before it happens,” she said.
The auto shop will give away free brake pads and shoes as part of the October fundraiser. Customers will pay for labor and any other necessary parts, then the shop donates 10% of the proceeds to the research fund.
Morsching estimated the shop has contributed $3,500 to research in its first four years doing the fundraiser.
Follow Brian Arola
@BrianArola. 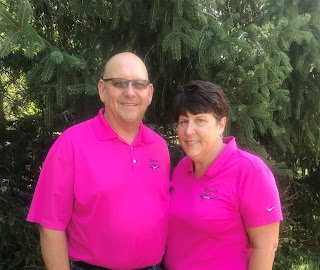 Top of Form
Bottom of Form

During the month of October, Elysian Auto Service in Elysian, along with more than 120 independent auto repair shops across the nation, is taking part in a fundraiser for breast cancer research.
The auto service will give away free brake pads or shoes; the customer simply pays for labor and any ancillary parts necessary. The shops will donate 10 percent of these proceeds to the Cleveland Clinic Breast Cancer Vaccine Research Fund.
In 2017, 114 auto repair shops in 34 states raised $114,000. Over the past seven years, these shops have raised $600,000 total. For more information, visit brakesforbreasts.org or elysianauto.com. 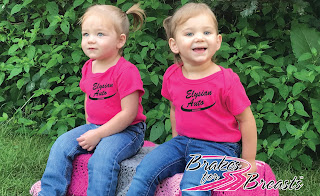 MINNEAPOLIS (WCCO) — At Elysian Auto Service in Elysian, the day is filled with a variety of automotive fixes.
This month, the emphasis is on brake replacement, leaving mechanics like Matt Whitener with the daily task of installing new brakes.
ADVERTISING
“We get up to two or three, depending on what kind of car count we get,” Matt said.
Not only do customers accomplish a necessary step in automotive maintenance, those who swap out the pads and rotors will ultimately help a good cause.
Owners Susan and Carl Morsching are involved in the Brakes for Breast Cancer Research program.
“I just felt like it would be something that’s great for the automotive industry and we’re proud to be the only one in Minnesota doing it,” Susan said.
The national effort raises money for research in breast cancer prevention.
“If you can do anything to help prevent cancer, of any sort, it’s great that you step up and do your part,” Susan said.
Brake pads are free through the month of October, a savings of up to $140.
“We’re doing a quality brake pad,” Carl said. “It’s a Wagner brake pad, it’s a top-quality brake pad.”
Customers only pay for the labor, and 10 percent of that cost is then donated to the Cleveland Clinic’s breast cancer vaccine research fund.
“They’re getting something free, which everybody loves, but they’re getting to give back also,” Carl said.
Savings may be the incentive to make automotive repairs, but the takeaway is helping a much greater cause.
“I just feel, in the automotive industry, there’s not as many opportunities to give back and this is something that’s set up so any other automotive company could step up and register and do their part for the month of October,” Susan said.
Elysian Auto Service donated $800 last year for breast cancer prevention research.
Click here to learn more about the program or to simply donate. 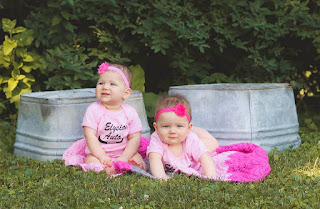 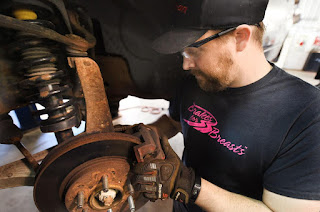 ELYSIAN — Carl and Sue Morsching of Elysian are among the millions of Americans with loved ones who’ve been affected by cancer.
The two owners of the Elysian Auto Service stand alone in Minnesota, however, in their business’ participation in a fundraiser raising money for breast cancer research.
Throughout October, Breast Cancer Awareness Month, the Morsching’s repair place will be among 150 independent shops across the country offering free brake pads and shoe installations. As part of the Brakes for Breasts fundraiser, customers only pay the labor cost for installation. A portion of that money will then be directly donated to the Cleveland Clinic breast cancer vaccine research fund.
Dr. Vincent Tuohy, lead breast cancer researcher at the clinic, recently finished a vaccine found to be effective in laboratory animals. The next step will be starting a bedside trial in the next year or so.
Elysian Auto Service is the only independent shop in the state participating in the fundraiser. Sue said she and her husband often try to get involved in good causes, and cancer happens to be one they know all too well. Her mother died from ovarian cancer, while Carl's grandmother died from breast cancer. He also has an aunt who's a breast cancer survivor.
“We just thought it was a wonderful program to help out the community and give something back,” she said.
What they particularly like about the fundraiser, which has raised progressively more money each year since starting in 2011, is knowing the money goes directly to research.
Making it even more personal to the Morschings, a similar, ovarian cancer vaccine is also being researched. Sue, whose mother died in 1995 18 months after an ovarian cancer diagnosis, said she doesn’t want her future granddaughters to have to worry about breast or ovarian cancer.
“I’d never seen anyone suffer like that and you don’t want to see anyone else go through it,” she said.
Carl said he’s proud to be the only auto shop in the state to help out. Repair places aren’t typically known for fundraisers, so the October effort offered a chance to get involved. The shop also offered the promotion last year.
“Nobody else has picked up on it and it’s been a great thing for us,” he said. “I think it’s amazing. It’s something that’s going to cover the whole United States."
Starting with just five shops in Ohio raising $10,000 in 2011, the fundraiser ballooned to 174 repair shops in 32 states reeling in $141,868 last year.
The Morschings certainly aren’t pumping the brakes on expectations this October. Through the first few days of the month, they've had a cars come for new brakes each day.
https://www.mankatofreepress.com/news/local_news/elysian-auto-service-pumping-the-brakes-on-breast-cancer/article_91bcf976-8b46-11e6-807e-978a5bf16df6.html
2014 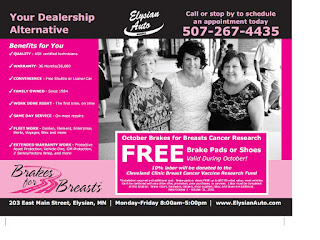 Local shop offers free brakes to fight breast cancer – First Shop in Minnesota Lisa Ingebrand LIFE/Enterprise During the Month of October, Elysian Auto Service in Elysian is helping raise funds for a breast cancer vaccine as part of the Brakes for Breasts fundraiser. Business owners Carl and Sue Morsching are excited to be the first in Minnesota to take part is this program. “My mom, Mary Ellen Tousignant, passed away 20 years ago due to cancer. There’s not a day I don’t miss her, and while we’ve participated in walks and other fundraisers before, we felt we wanted to do more. When I learned about this program and what Dr. Tuohy is doing, we knew it was a good fit for us,” Sue explained. Dr. Vincent Tuohy has created a vaccine that has proved effective in laboratory animals in actually preventing breast cancer. After 13 long years, Dr. Touhy and his research team are just a year away from their first bedside trial. All of the money raised by the Brakes for Breasts program will directly benefit the Cleveland Clinic Breast Cancer Vaccine Fund, towards research. Ten percent of each brake job done during October as part of the Brakes for Breasts fundraiser will be donated to Dr. Tuohy and the Cleveland Clinic Breast Cancer Vaccine Research Fund. “My mom died of ovarian cancer, but we have other family members who have fought breast cancer. Plus, Dr. Touhy’s second vaccine is focused on ovarian cancer,” Sue explained. “Cancer effects so many people… so many families. We’re happy to offer this program to our customers.” In addition to helping raise money in the fight against breast cancer, the Brakes for Breasts program is also a good deal for customers. As part of the fundraiser, the auto repair facilities are giving away free, quality brake pads or shoes. The customer pays the labor and any other ancillary parts necessary to complete the brake job and the shops then donate the brakes. The Brakes for Breasts program is in its fifth year, having started with five shops in Ohio in 2011. The fundraising program has grown each year and now includes 135 independent auto repair shops across the country. Visit http://www.brakesforbreasts.org for more information. 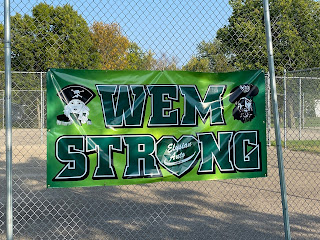